After remembering the issue of SanDisk-derivative drives failing after 32,768 hours and 40,000 hours respectively, I was interested in what the firmware for this Samsung 970 EVO Plus might look like.

This story begins innocently: We simply head over to Samsung’s firmware website. Immediately under the “Samsung SSD Firmware” grouping, we find “NVMe SSD-970 EVO Plus Firmware”. Nice - no need to search further!

It claims to be a 26 MB ISO. That’s… a little big, but what do I know about storage device firmware, anyway? A warning sits ominously at the bottom:

Of course, it’s.. an ISO. This isn’t just ISO 9660 with the NVMe firmware + maybe an updater installed… this is a flat-out ISOLINUX-made ISO that you boot.

We can use 7z to inspect the ISO a little more closely:

My NVMe’s vendor wants me to stop everything I’m doing and boot a random operating system.

Let’s continue. boot/grub/grub.cfg has the following:

That’s not as bad, I suppose. Let’s take a look at initrd - it’s gzip compressed, so nothing fancy.

Oh, Buildroot! I suppose that if you’re going to make an entire Linux-based environment to flash firmware, you might as well use Buildroot. The entire thing appears to be very simple, containing just enough to have Busybox up-and-running via uClibc.

Let’s poke around in /root. We can immediately find fumagician as a subdirectory - “firmware update magician”, presumably. (Unfortunately, there’s no /root/.ash_history with anything fun.)

Good, we’re on the right path! At least I don’t need to update this thing’s firmware…

Let’s take a look at fumagician itself. We’ll use Ghidra.

It turns out there’s not much of a challenge there, as the binary ships with full symbols:

Around this time, I just searched to see if anyone else put in effort to decrypt. It turns out one GitHub user already had, noting this is AES-256-ECB. Curiously, the key they used to decrypt differs - unclear if it does across firmware versions, or model revisions. 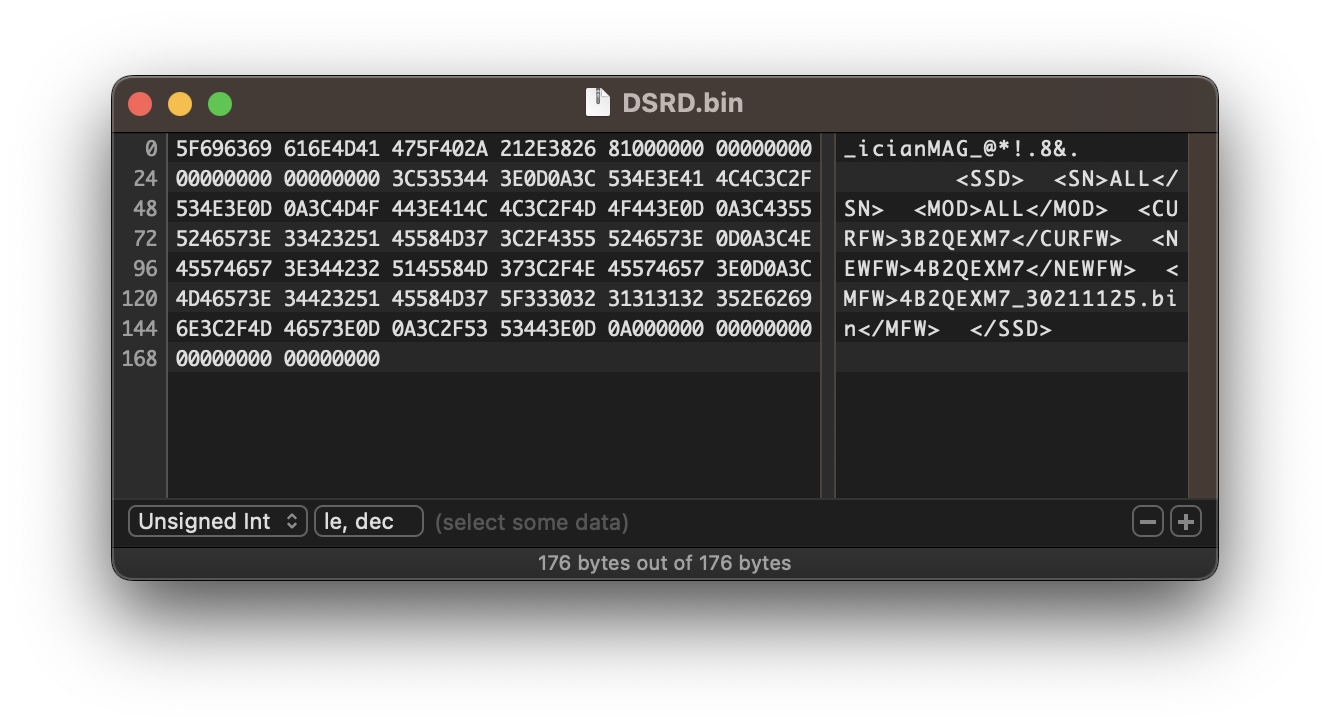 After editing DSRD.bin, we see a header of _icianMAG_@*!.8& - good! Per the binary, this is intended. Afterwards, we see a uint32_t reading to be 129 bytes - the length of the XML within:

We can then do the same to 4B2QEXM7.enc. After the header and length, we find the notorious PK file magic, indicating that the contents are… a ZIP file.

Huh. Well, let’s try decrypting it with the same method.

After opening our now decrypted firmware in Hex Fiend once more, we see the first 0x600 bytes appear to be binary data - seemingly encrypted, unlike previous firmware versions per analysis by others. Thankfully, we then see FW_IMAGE_META_SIGNATURE_________4B2QEXM7 - indicating we did decrypt correctly! Unfortunately, 0x4000, the binary continues to be encrypted.

It appears that this firmware does not appear to utilize the same key as previously. This brings this blog post to a halt - will have to continue researching :)

To reiterate, my NVMe’s vendor wants me to stop everything I’m doing and boot a random operating system.

I think I would somewhat understand if this was only available via a Windows-only tool. Instead, there’s a Linux distrubution with needless - and useless - obfuscation, hindering firmware research. Where did we go wrong?

(Dear Samsung: Given that this drive updates via standard Firmware Download Image/Commit - it would be nice to have this on LVFS :)